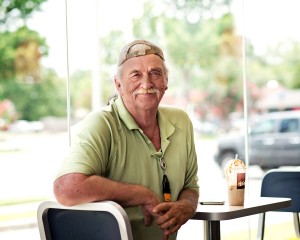 Lucky lived without a home for fifteen years. The last ten were here in Fort Smith where he lived with many others on the river. Lucky’s homelessness wasn’t by his choice. He developed an illness that made working difficult and eventually impossible. He was used to work and had held construction jobs for most of his life. He had no other skills and the “smaller” jobs hired more robust and young workers. Eventually, he was forced to live on the streets. But, Lucky isn’t complaining. He is simply reporting the facts of his life. This seventy year old man, with a big heart and sincere eyes that speak with a combination of seriousness and laughter, continued to share. He tells of the time his breathing became very difficult and how local agencies helped him. He had been resourceful in getting access to certain medications and even had the assistance of a local businessman who had befriended him at times. But, as his illness progressed, he needed more consistent care. A generous couple at the Arkansas Dream Center helped him apply for Social Security; and he found Patty at Crawford Sebastian Community Development Council who helped him get into a home for the first time in fifteen years. “It was difficult at first to get adjusted to sleeping inside.” Lucky tells about his home and the van he purchased when he first received his Social Security check. He mentions that he knows how to eat cheap. “A lot of people are a little cynical about homeless people. They try to characterize or pigeon-hole us. They think we’re stupid people. But there are a lot of us who don’t do drugs, who never hurt anybody, who don’t do anything like that.”

Lucky’s’ story is about the hope he found in the help provided by agencies, but is quick to tell you, it was the people who worked there that made the difference for him.

Sadly, soon after this interview Lucky passed away in his apartment at seventy years old. He will always be remembered as a kind and gentle soul.